[Founded in 1995 by Oliver Rajamani, a production and educational company helping promote Romani and Flamenco history and culture with sales of memorabilia.]

Flamenco India is an innovative musical journey into the Indian roots of Spain’s Romani (Gypsy) Flamenco. It is a continuation of culture and music with a common ancient history. It is Rajamani’s hybrid creation. The first artist of Indian descent to bring Flamenco to its ancient roots in India while paving new inspiring pathways. Rajamani has been honing his unique interpretations of flamenco and Indian music by adding new rhythms and melodies and composing original pieces of music not found anywhere. Rajamani is one of a few artists in the world who has been shedding light on the Indian roots of Spain’s flamenco music and dance before it became a commonly recognized concept.

Rajamani’s Flamenco India Innovations: Thani Rupakaria– Utilizing the Indian 7 beat Rupak tal with Flamenco’s Solea por Buleria. Thani is a Tamil word meaning ‘alone” or “loneliness”. Teen Thal-Atte–utilizing the Indian 16 beat teen tal with flamenco formats. Thal-Atte is a Tamil word for lullaby. Japam-composing original pieces for flamenco India dance in 5 beat cycles. Japam is a Tamil word that means “prayer”. Story telling:Composing works with India spiritual themes and enhancing and infusing the story telling aspects in Flamenco India. Interpretring India folk songs in Flamenco format. Flamenco India guitaring:Rajamani’s guitar playing is neither Flamenco nor Indian. It is Rajamani’s own natural organic blend of both. Rajamani is self taught. He has never had any formal training.

The world and its humanity is always mixing, creating and innovating and nothing is stagnant or of any purity in this world except the spiritual oneness of love and joy.The following writing is not to create tension or division but to rather to shed light on unknown historic elements and technicalities of Flamenco that the majority of the world is unaware or willing ignorant to.

Flamenco is the music of the Romani people of Andalusia–though it has become a national musical emblem of Spain today. Flamenco is for the Romani community a natural form of communal therapy and spiritual ritual. Before the Spanish accepted flamenco to be a national treasure or even a form of art, the Gypsies had been living and breathing it. It had been their one pathway to transcend the world of pain and persecution brought on by the Spaniards. In Spain the Roma faced the Spanish inquisition established in 1478. The inquisition as much as it was meant to have a negative purpose of getting rid of foreign blood, it also became a unifying factor for all foreign cultures within Spain to bond. Out of this bonding and pain blossomed a tradition labeled “flamenco.”

Who are the Creators of What We Know As Flamenco Today?: Flamenco consists of Romani forms such as bulerias, solea, seguiriyas…….. Flamenco was seen as a lower class music by the Spaniards in its primary stages since it was purely only performed by the persecuted Romani community. Infact the Romani artists were called “Flamencos” by the Spainiards-a term that has no concluding historic origin. Flamenco was passed on in the Romani communities from family to family over many generations. The Flamenco songs are a pure historic diary of the Romani experience of persecution. Later as the Spaniards built a facination and appreciation for flamenco in the upper society, the traditional Iberian folks songs and dances eg. Sevillanas, were added into the Flamenco repetoire and masterfully interpreted by the Romani artists who would perform for the upper class Spanish society partys. The folk songs were given the baptism of Romani passion and fire.

Flamenco has musical influences of the Middle Eastern communities of Andalusian (Arab, Jews and Moroccan Berbers). This influence of Arab music found in Flamenco is deeply misunderstood as an Arab or Jewish creation to Flamenco. The truth lies in the fact that Arabs and Jews had their own classical and religious music in Andalusia, while Flamenco was clearly performed by the Romani. The peoples co-mingled in many instances through experience of persecution which certainly creates cross mixing. The Arab elements of Flamenco are the Romani interpretation and adoption into flamenco style. The most latest influence on Flamenco comes from the African slave rhythms of rumba which was transported from the Spanish colonies to Spain and adopted and interpreted by the Romani community. The pop band “Gypsy Kings” is a good example of this.

Similarities to Indian dance and music: The Flamenco dance movement of the hands and feet can be seen in the classic and folk dances of India unlike any other dance form. The “Zambra” which is a flamenco Romani dance style can definately be said to have origins in the Moorish folk dances and sometimes show similarities to belly dance ” rak sharqi”. Flamenco singing has its roots in Islamic and Indian vocal techniques and scales. The closest representation of what Flamenco’s “Cante Jundo” originates from is the “Oppari” of South India.The raga Bhairavi of Indian music is clearly found in Flamenco including all other European Gypsy scales and music. The “llamada” of flamenco dance is another form very similar to Indian thihai mathematical structure where musicians and dancers conclude a composition with a high burst of energetic mathematical footwork and upwards hand and head justure. The passion of flamenco can be seen in many Indian dance forms, though in India it takes on a more royal and lighter approach while in Flamenco it takes on a more aggressive heavier approach. The rather stylized tension that flamenco artists emulate in their music and dance is a clear sign of a persecuted people showing their persistance in life. One can compare flamenco to the Black African American experience in life, music and spiritual culture. Romani flamenco lyrics carry a heaviness of pain, loneliness and protest which is similarily found in African American music.

Romani Origins: India is the original homeland of the Romani people or better known as Gypsies. The Romani people are historically, genetically and linguistically connected to India. According to historical data the Roma’s first appearance in Europe was in the 14th century. The term “Gypsy” comes from the misbelief Europeans had that the Roma were Egyptian. There were other misbeliefs the Europeans held of the Roma that lead to many persecutions the Romani populations faced over the hundreds of years since their arrival in Europe. Below is the latest genetic and most accurate map of the Romani genetics origins provided to us by worlds leading geneticist Dr. Kumaraswamy Thangaraj. Northwest India being the homeland of the Romani while South Indian Dravidian genetics being the ancient origin in the genetic trail. 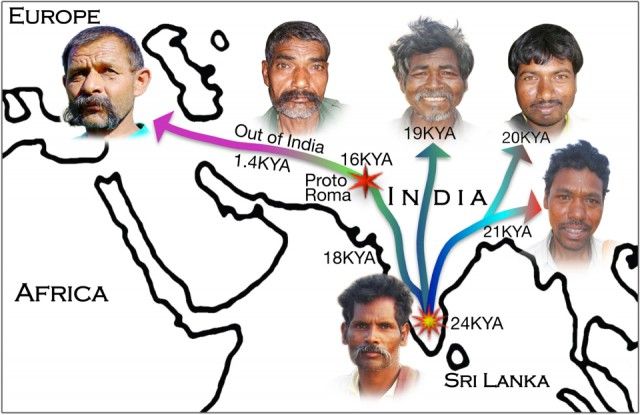